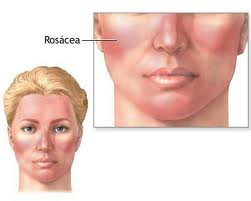 Rosacea or Acne Rosacea, a chronic skin condition that primarily affects the skin around the nose, cheeks, forehead, and chin. It can occasionally presents itself on the neck and upper chest. This condiiton is characterized by redness, dilation of blood vessels, and in severe cases, the formation of bumps and pimples.

The cause is unknown, but may due bacteria, mites, or fungus.

Certain factors are known to aggravate the condition.

Rosacea affects tens of millions of people throughout the world with one in every 20 Americans. It is common in fair-skinned people in their 40’s or 50’s.

Although this condition is harmless, the red-faced appearance often causes people to be unhappy with their appearance and makes them self-conscious.

Acne Rosacea features all of the conditions found in rosacea, in addition to presence of papules, pustules, and, in some cases, the fostering of parasitic microorganisms (mites). While these may resemble acne, blackheads are absent and burning or stinging may occur.

The adolescent mite dermatitis and early symptoms of rosacea are frequently misdiagnosed as adolescent acne. 90% of the adults and teenagers acne is caused by Demodex mites, 10% is bacterial. The change of the hormones makes the sebaceous glands produce more sebum, making the facial skin a perfect living and breeding place, they can now easily multiply and this is translated in infections and acne. (source: Demodexsolutions.com).

Hormonal changes are the cause of the microcirculation problems that are common in mature skin. One such problem is couperouse vein, or telangiectasia, the dilation of the capillary wals. As the walls of the capillaries atrophy, they lose elasticity, causing the walls to dilate and fill with blood. Resulting in erythema (red blotches) and rosacea.

Some of the causes of couperose veins are: heredity, alimentary (digestive) problems, alcohol, smoking, sun damage, harsh cosmetics, trauma, pregnancy, excess localized heat, topical corticosteroids, inflammation, and heat/cold fluctuations. These all can lead to permanent dilation of the capillaries.

Unfortunately, Rosacea cannot be cured but it can be controlled.

Any person with Rosacea should avoid prolonged sun exposure and use a sunblock with SPF 30 or more.

Controlling the flushing can allow one control the rosacea. Treatment includes avoidance of anything that makes one flush and known precipitants of flare-ups.

Rosacea doesn’t always worsen over time, but the symptoms tend to progress when left untreated.

There are several treatment options available at Svetlana’s Skin Secrets Medispa to keep Rosacea from getting worse: